skip to main | skip to sidebar

November saw the highest number of Storehouse bags ever given out  in one month: 200. This resulted from requests from 11 different agencies and 9 non-agency requests. In the current economic climate it looks as though the need for Storehouse bags will be as great as ever.

Currently the cupboards are looking quite healthy. However, we still need on going donations, especially during the winter months. At present we are getting short on the following items.

As a church this year we have again been able to buy up to 150 Christmas presents for children and young people at the Bury Family Centre, Acorn House (mother’s and children’s unit) and one of the local old people’s homes.  It’s such a blessing  that we have been able to bring some joy in the lives of these people at this special time of year.

After over two years co-ordinating Storehouse we feel it’s the right time to step down and pass “the baton” onto someone else. We are really pleased that Steph Day will be taking over this role. We know that this ministry will continue to thrive and know God’s blessing as she takes it forward.  We have thoroughly enjoyed our time in Storehouse and have counted it a privilege to serve God, West Suffolk Vineyard Church and the local community in this way. During the last two years (i.e. Dec 2010 to Nov 2012) a total of 3236 bags have been given out to clients. We want to say a big “thank you” to all those with whom we have worked during this time: staff from agencies, Storehouse Team members, and those who have given towards the work of Storehouse. ie members of West Suffolk Vineyard Church, members from  other churches, schools and individuals who have given towards this work. We will miss being part of the Storehouse team serving those in need in our local community, but we are looking forward to seeing it continue to grow in 2013.

Thank you to everyone who continues to support the work of Storehouse.
God bless you,
Andrew & Mary Soman

As a result of donations given at recent Harvest Services the Storehouse cupboards are full of tins. We do however need cereals (multi-packs if possible), UHT milk, tinned meat and tinned potatoes. We are so thankful to all the schools and churches that gave their food at Harvest. It is so encouraging to know that so many local people and organisations continue to support the work of Storehouse. We received donations from a total of eleven schools, fourteen churches and one Babes and Toddlers group. It was a privilege for members of the Storehouse Team to take part in three of the school Harvest Services.

We were blessed when two members of West Suffolk Vineyard Church gave a financial contribution towards Storehouse as a result of the sale of some greeting cards they had made. Thank you to both of them.

During a recent Sunday morning service we had an update from one of the workers from a local Drugs Agency, who encouraged us by saying how much the help we are able to give their clients is appreciated. It’s great to know that we are able to help these folk who have found themselves struggling to cope as a result of  changes that have been made affecting their State benefits.

Thank you to everyone who continues to give food towards the work of Storehouse. Without you we wouldn’t be able to show God’s love by meeting the practical needs of those in our community.
God bless you,
Andrew and Mary Soman

During August we gave out a total of 164 bags of food, resulting from requests from 12 different agencies and 5 non-agency requests. This total was the highest since February this year.

There have recently been several changes within the Storehouse Team. We want to say a big “thank you” to the following people who have left the team to concentrate on other things: Sarah and Lindsay who attend Great Barton Free Church, Emma who has started a University Course and Issy  who spent most of last year with the team on a Monday morning as part of her “community” work for her studies at school. It has been great to have each of them working as part of the Storehouse Team.

We want to say “welcome” to Stacey and Martina who have very recently joined the team. We hope they will enjoy being part of this “outward-focussed” ministry within West Suffolk Vineyard Church.

If you able to help buy any of the above items it would be very much appreciated. Thank you to all those who continue to support the work of Storehouse.
God bless you,
Andrew and Mary Soman

Posted by WSVC Storehouse at 12:18 No comments:

June and July have continued to see a large number of bags being distributed. In June we gave out 143 bags and in July 122 bags were given out.

Following the recent death of Shirley Dickson, who had been on the Storehouse Team for some time, Shirley’s family agreed that any financial donations at Shirley’s funeral be made to Storehouse. This has been very much appreciated. It shows that the work of Storehouse, reaching out to those in need in our local community with God’s love, was very dear to Shirley’s heart.

We would like to thank Clare, a member of the Storehouse Team, who has recently moved on from her involvement with this ministry.

Thank you to all those who continue to support this vital work of Storehouse.
God bless you,
Andrew and Mary Soman

Posted by WSVC Storehouse at 11:20 No comments:

We welcome Clare, Margaret and Caron who have recently joined the Storehouse Team.  A big “thank you” to Shirley who has had to leave the team. We do appreciate her faithfulness in serving in this way. We also thank Nicola who is having a break from serving within Storehouse for the time being.

We recently enjoyed a Storehouse team “get together” where we were able to chat through any issues, explore new ideas and generally celebrate together how God continues to bless the work of Storehouse. At the meeting one of the team told of a situation when we were able to give a homeless person a coat. They were so grateful that we were able to help them in this way.

Recently a couple within West Suffolk Vineyard Church held a joint Birthday party. Instead of guests bringing presents they were asked to bring food  for the work of Storehouse. What a great idea. As a result several boxes containing food were brought in to swell the Storehouse cupboards! A sizeable cash donation was also received. Thank you to our friends who thought about Storehouse in this way and initiated the idea.

Posted by WSVC Storehouse at 11:02 No comments:

During March the number of food bags given out decreased from the exceptionally high number in January and February. A total of 140 bags were distributed in March, resulting from requests from 14 different agencies and 9 non-agency requests.   What a blessing that we can continue to care for those in need in our community by showing God’s love in this practical way.
We are so grateful to those who volunteer to pack bags. We have a great team made up of people from West Suffolk Vineyard Church and those from other churches and individuals also. We want to say a big “thank you” to Rosie and Alison who have recently left the team to concentrate on other ministries within the Church. We also welcome Emma and Adrian to the team.
We also appreciate a team of people who we contact when supplies of food are getting really low. Their swift response means the food cupboards are topped up ready to be used to pack bags.
At present the Storehouse cupboards are starting to look bare. We especially need the following items:

If you are able to help out in buying any of the above that would be very much appreciated. Thank you to all those who support the work of Storehouse, in any way.

Posted by WSVC Storehouse at 11:21 No comments:

Storehouse Chatter
January and February have proved to be the busiest months on record. In January a total of 187 bags were given out, resulting from 15 different agencies and 7 non-agency requests. Of the total number of bags 60 were given out to clients referred by the local drugs agencies. In February a total of 181 bags were given out, resulting from 14 different agencies and 24 non-agency requests.
As a result of the ongoing high number of requests please keep the food coming in. We currently need the following items:
• UHT milk
• Cereals
• Tea (individually foil packets)
• Fish
• Pot noodles
• Tinned meat
• Tinned Vegetables
• Tinned potatoes
• Tinned desserts
• Food for people with no cooking facilities
In February Lindsay who is one of the Storehouse Team unfortunately fell over in the snow and broke her ankle, so will be missing from the team for some weeks. We pray for a swift and full recovery for her.
During the last few weeks we have welcomed Nicola, Yvonne and Maureen to the Team. It’s great to have these new people willing to serve in this way.
We have been greatly encouraged by one of the local Slimming World groups who now give regularly to the work of Storehouse, all because of one of the group members who also attends WSVC who mentioned the work of Storehouse. If you know of any groups or organisations that would be interested in supporting the work of Storehouse please contact us via the main office.
Thank you to all those who support the work of Storehouse. May you know God’s blessing as you serve Him in this way.
Andrew & Mary Soman
Posted by WSVC Storehouse at 13:40 1 comment: 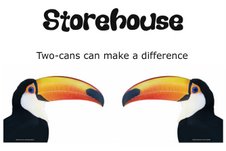 WSVC Storehouse
Welcome to the blog for the West Suffolk Vineyard Church Storehouse ministry. In this blog we hope to keep you up-to-date with what Storehouse is doing, as well as bringing to your attention items that we think might be of interest to you. PLEASE FEEL FREE TO ADD YOUR COMMENTS - we would love to hear from you, whether you are part of West Suffolk Vineyard or not.

Links to some of the agencies with whom we have connections

Other useful and interesting links